THANK YOU to Charles Frodsham for supplying the information below!

Broadcaster extraordinaire Don Anderson served KFH as chief announcer, master of ceremonies of live programs, and program director from 1949 to 1961 when he died suddenly of a heart attack. 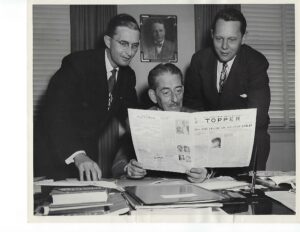 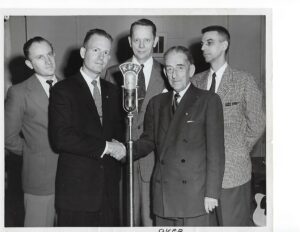 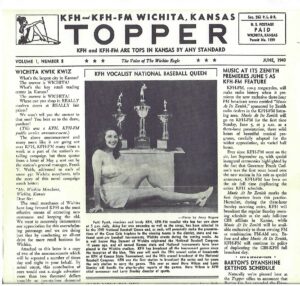 An interesting note about Patti is that her radio voice sounded very similar to that of women’s director Ethel Jane King.  So when Ethel Jane left KFH to join KAKE-TV in 1954, the station asked Patti to begin hosting the program titled “E-Jay’s Notebook.”  KFH owned the program title and Patti became “Miss E-Jay” on the air.  To many listeners the change seemed seamless, and Patti continued in that role until she and her husband moved from Wichita in the mid-1950s. 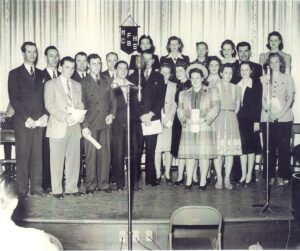 The 21-member Cessna Aircraft employee group called “Strictly Personnel,” appeared weekly at 7 p.m. on Sundays on KFH during 1941 and 1942.

This photo is courtesy of Active Aging reader Elizabeth “Babe” Watkins Day, one of the members of that group. “Babe” is the dark-haired girl in the back row (center) just to the right of the KFH-CBS banner.

Babe was able to identify three others in the photo: Francis “Flo” Lockman is to the right of Babe on the back row; Helen McLaughlin Puffer far right on front row; and Ruth W. Wilson, far right, back row. 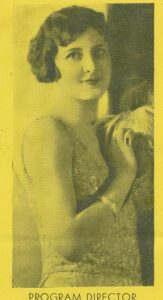 Sue Webb Fulton of Wichita was known as that “Jayhawker Girl” on KFH in the 1920s and early 1930s. Her singing included all genres including operatic and classical to popular, jazz, and blues.